Alternatively, read our cookies policy to find out more about our cookie use and how to disable cookies.
Accept & Continue
Time to update your browser….
You’re using a browser that doesn’t display modern web sites properly. Please upgrade to a newer browser to fully enjoy this website.
Close
Don’t strip back your summer plans - combine your holiday with a European festival and save on the airfare.

For many of us, there’s no better way to enjoy the summer sunshine than at one of the various festivals held throughout the country, with a waterproof poncho on our back and a cup of over-priced beer in hand. But with ticket prices for UK festivals getting somewhat out of control, this experience can sometimes come at the expense of taking a holiday. On top of that, the cost of flights these days can force you into stripping back your summer plans.

But there is another option: instead of choosing one or the other, why not combine your summer getaway with a festival in Europe? By extending your stay for a few more days, you’ll get the best of both worlds whilst making your money work harder too. Now that’s a deal that’s pretty hard to resist… 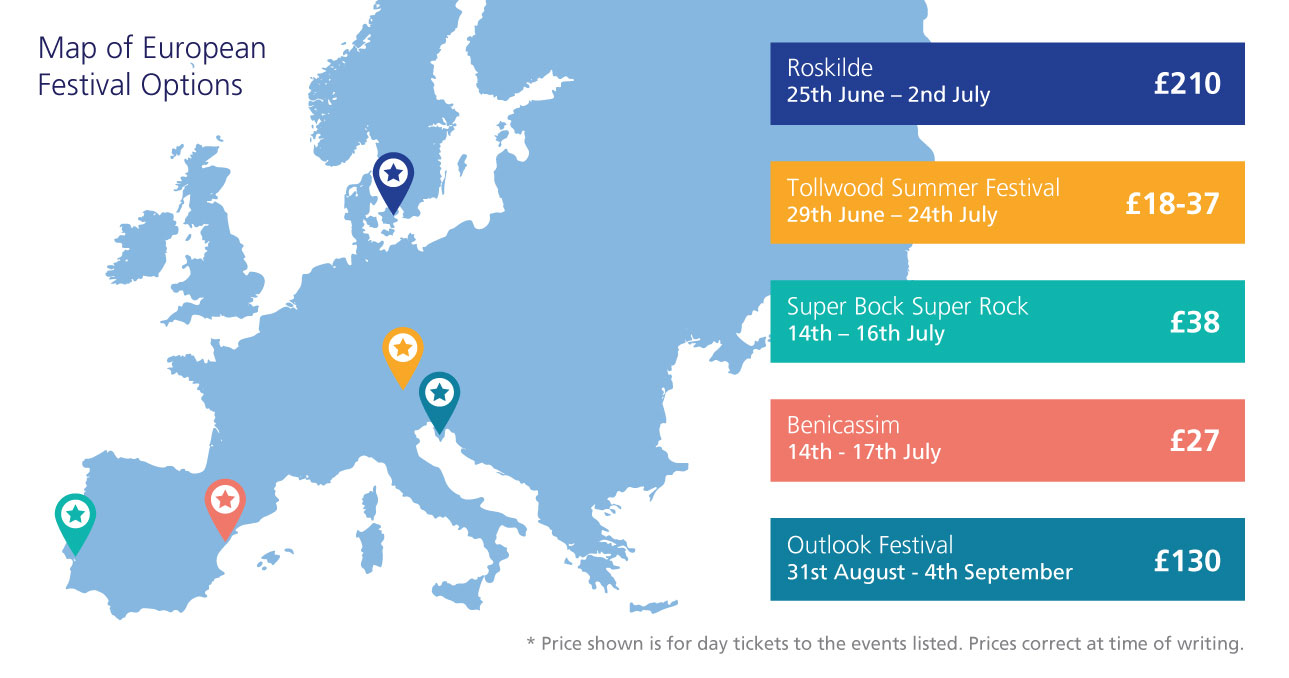 If, when asked the question: “What kind of music are you into?” you reply: “A bit of everything”, then this annual event could be your cup of tea. This year’s festival-goers can enjoy a varied line-up that includes James Blake, Neil Young, New Order and Red Hot Chilli Peppers, as well as a range of gourmet and organic food from more than 80 stalls.

Roskilde neatly doubles as a summer holiday by offering a camping experience that will keep older children and teenagers entertained too. There are a number of conveniently-placed communal cooking stations and campfires on offer plus there’s the opportunity to soak up some Danish scenery by the festival site’s very own swimming lake. Want to explore further afield? Copenhagen with its abundance of museums, beautiful buildings and the 19th century amusement park, Tivoli Gardens, is just a 30 minute journey away.

Taking place each year in Munich’s Olympiapark, the Tollwood Summer Festival is a celebration of diversity and culture, with dozens of events taking place over three weeks. Of all the festivals on our list, this is top choice for families – there’s no camping, a focus on the environment and plenty of stalls and performances to keep little ones entertained. Entry is free, but you have to pay to see some of the bands; this year’s acts include James Bay, Deep Purple, Jamie Cullum, and Beirut.

Combine your trip with a stay in Germany’s unofficial capital to get the most out of your airfare. Key sights of Munich include the Englishcher Garten, an enormous park complete with paddle boat lake, play areas, bike rentals and a selection of lively beer gardens; world-class museums such as the Deutsches Museum with its inter-generational activities and exhibits; and the mysterious old town with its winding, cobbled streets and fairy-tale buildings.

Situated in the beautiful city of Lisbon, the rather amusingly named Super Bock Super Rock festival attracts rock and metal fans from all over Europe. But don’t let that put you off – Bloc Party, Kendrick Lamar and Jamie XX make up this year’s headliners, so it’s not all head-banging and heavy metal.

After you’ve had your fix of festival tunes, make the most of Lisbon itself by exploring the atmospheric old town, Alfama, on foot; sampling the delicious seafood specialties of the region; or hopping on a train and journeying south of the city to lounge on some of Portugal’s most stunning beaches.

It doesn’t have to be an either/or predicament. Choosing a European festival and tagging on some R&R time can really make the most of the price of your fligh.

Benicàssim – or The Festival Internacional de Benicàssim, to give it its full name – is ideal for those who feel their summer simply isn’t complete without a beautiful beach, thanks to its location on the glittering Valencian coast. However, with big hitters such as Muse, Massive Attack and The Chemical Brothers taking to the stage this year, you might not be able to peel yourself away from the excitement of the stages.

Benicàssim is situated just an hour away from the picturesque city of Valencia or three hours from vibrant Barcelona - both of which make a sensational stopover trip. When the festival-action is over, enjoy a coastal road trip to one of these cities to make both your holiday (and your cash) stretch that little bit further.

31st August - 4th September, Croatia
Tickets cost £130, with the option of putting a £40 deposit down in advance.

Calling itself “Europe’s biggest celebration of sound-system culture,” Outlook Festival champions underground dance floor music, from house to hip-hop, reggae and electronica - a little something for a variety of musical tastes. This year’s line-up includes the likes of Andy C, Roni Size, Damian Marley and Norman Jay MBE, all performing against the spectacular backdrop of an abandoned fort overlooking the Adriatic Sea. As well as this magnificent, historical setting, beach BBQs take place throughout the day to the beats of a soothing soundtrack, ideal for enjoying a spot of snorkeling and other water activities. You can also tie the festival in with a visit to some of Croatia’s stunning islands – Krk, Cres and Pag are the nearest ones to Pula, where Outlook is held.

Turning your musical break into a fully-fledged holiday seems to be the way to make the most of your money when budgeting for the coming months. As well as tagging on a bit of R&R time to look forward to it will mean you really make the most of the price of your flight. Will you be cashing in on this ‘2 for 1’ concept this summer?

We're not responsible for the content of other websites.